“The problems posed by the digitalization of the economy should be addressed collectively and any interim measures taken by countries unilaterally should be “as little damaging as possible”.

Pascal Saint-AmansDirector of Taxation at the OECD

“Digitalisation brings countless benefits and opportunities but it also requires adjustments to our traditional rules and systems.”

“The digital economy is a major opportunity for Europe and Europe is a huge source of revenues for digital firms. But this win-win situation raises legal and fiscal concerns.”

In the Digital Economy, a main concern and potential source of disagreement between countries is the question of where value is created. While countries agree that a multinational’s profits should be taxed in the jurisdictions in which it creates value, some countries argue that the value for companies in the Digital Economy derives from factors such as user participation or user location”.
Banks are experiencing structural changes to the way they operate and create value as a result of the Digital Economy. Whilst the international tax framework needs to be responsive and flexible to the changing nature of digital economies, banks can be differentiated from other “pure” digital companies.
Measures taken to address the tax challenges identified must be internationally coordinated in order to avoid the danger of double or multiple-taxation.

OECD workstream on tax in a digital world

The Digital Economy is experiencing dramatic growth and is altering the way that multinational organisations interface with their customers.  Many jurisdictions are concerned that their taxation systems do not cater well enough to the Digital Economy, and accordingly revenues are being diluted. 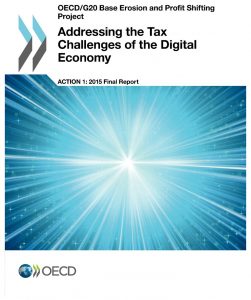 Following on from a 2015 report  “Addressing the Tax Challenges of the Digital Economy” as part of the OECD/G20 Base Erosion and Profit Shifting (BEPS) package, the Task Force on the Digital Economy (TFDE), sought input from the public on a number of key issues including:

The 2015 report acknowledged that it would be difficult to ‘ring-fence’ the Digital Economy from the rest of the economy for tax purposes, and other BEPS measures would need to be considered.  Following on from this, a new interim report on the implications for taxation of digitalisation was delivered to G20 Finance Ministers in March 2018. On 16 March 2018, the OECD published its interim report following on from its consultation. It sets out the agreed direction of work on digitalisation and the international tax rules through to 2020.

The OECD members agree that there needs to be a “coherent and concurrent review of the ‘nexus’ and ‘profit allocation’ rules” which are fundamental concepts relating to the allocation of taxing rights between jurisdictions.  A consensus based approach is preferred given differing views, and the goal will be to produce a final report in 2020, with an update to the G20 in 2019.

The report also sets out the framework of design considerations for countries in favour of introducing interim measures.

In its interim report, the OECD did not directly address Digital Economy concerns from the perspective of the banking industry.

EU workstream on tax in a digital world

On 21 March 2018 the European Commission proposed the introduction of a digital services tax imposable on revenues resulting from the  provision of certain digital activities, as well as the introduction of a new regime relating to the corporate taxation of companies “with a significant digital presence”, aimed at addressing the tax challenges of the digital economy in the European Union.

These legislative proposals are to be submitted to the Council for adoption and to the European Parliament for consultation.

The European Commission said the current tax rules were not designed for the recent boom in global digital business that has little or no physical presence.  As a result, there is a disconnect / mismatch – between where value is created and where taxes are paid.

The European Commission suggests that customers create value for banks by the information they provide.  However, it is not clear how this can be split from the profit generated by specific client transactions.

Banking vs other digital business

Banks are adopting technology at different speeds. Some banks are embracing collaboration and co-innovation, actively investing in start-ups and making other strategic investments. Accordingly, there is an interrelationship between the two, where banks look to FinTechs for speed and agility to develop products and target customers, and FinTechs rely on banks infrastructure, scale and client base.

The use of platforms is key to driving banking value in the digital economy. Platforms bring together products and services for consumption. Banks are in a good position to build partnerships within the industry and outside of the industry.

Data itself does not create value. However, data is useful as it gives banks useful information on how best to tailor the banking experience and an ability to cross sell products. Banks are increasingly investing in analytics to best drive value from the data they hold.

More generally, there is a movement toward an ‘open’ banking landscape whereby products, services, functions and data (including customer data) can be shared with third parties. Regulators and lawmakers have already implemented frameworks for requirements, for example in the EU around third party sharing of customer data and payments information.

Structure of banks and value creation

To respond to competition from outside the industry, banks are adopting more customer-centric strategies to engage with digitally-aware customers (e.g. in the retail banking space, digital apps and platforms now offer a broad range of solutions).  The ways that customers bank have changed vastly in the last 5-10 years, and will continue to do so.  Banks are also improving productivity and reducing cost by closing physical branches, reducing the number of ATMs / cashpoints and ushering customers onto digital service points, on phones, tablets and online.  Automated systems deal with telephone banking as staff numbers are reduced.  With a reduction in ‘bricks and mortar’ banking, customers may ‘consume’ financial services at their place of choosing.  This could be in any jurisdiction, i.e. bank customers could be located anywhere.  However, it would be unusual for a bank’s retail customer base to not be mainly located in jurisdictions where the bank is licenced to operate.

In commercial banking, new technologies such as Blockchain and Artificial Intelligence, are seeking to streamline the way banks perform their core functions and interact with businesses and commercial clients.  Additionally, banks are making substantial technology investments to explore the next series of value networks and systems.

Notwithstanding the change to how banks interact with customers, they continue to carry on other traditional banking activities, particularly in wholesale and treasury activities.  Bank funding is sourced locally and globally, and is dependent on market conditions and availability of credit.  The tax rules that apply to banks, including the residence / source principles, attribution rules around profits to permanent establishments should continue to apply to these transactions.

Banks recognise the need for a fair and flexible tax system which appropriately allocates taxing rights based on where value is created. Tax reform to the Digital Economy has the potential to impact different banks by differing scales (e.g. local vs global banks, and retail vs wholesale banking).

An approach that is unilateral, poorly considered and perceived as revenue-raising could bring jurisdictions out of line with each other.  Particularly where the majority of jurisdictions are still applying established residence and source taxation principles.

Banks have traditionally safeguarded important private customer data and continue to do so.  To the extent that this information is required to be shared in an ‘open’ banking ecosystem with third parties, the protection of data is paramount.

The successful implementation of BEPS initiatives globally needs time to properly have impact.  Any inconsistency in global tax rules could discourage investment and growth due to uncertainty.  A greater risk of uncertainty arises from interim solutions that are not applied consistently for global banks.