EBF 2017 Spring economic outlook for the euro area: IN NEED OF POLITICAL CERTAINTY

THE EBF FORECAST FOR THE EURO AREA ECONOMY: 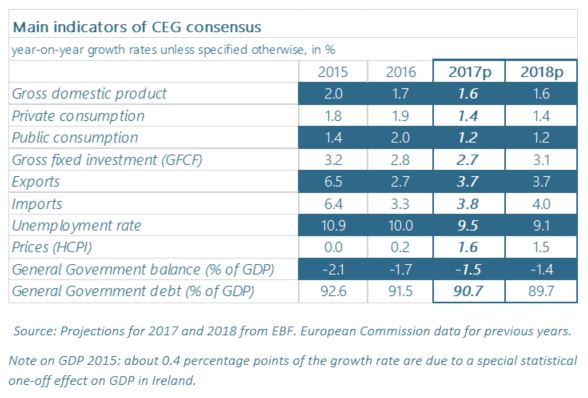 The Chief Economists’ Group of the European Banking Federation expects the euro area to continue the economic recovery supported by a highly expansive monetary policy, stronger labour markets and a better global outlook. GDP growth is forecasted to reach 1.6 percent in both 2017 and 2018. However, growth could be stronger if it was not for the significant political uncertainty and geopolitical tensions which are presently surrounding the world economy. These risks keep investment activity and world trade low in comparison to periods of more stable and better predictable external conditions.

While private consumption has been an engine for growth in Europe, the rising inflation will take its toll of consumption also corresponding with a diminished GDP growth compared to previous years. We expect private consumption to grow by 1.4 percent in both 2017 and 2018. Fixed business investments will grow by 2.7 percent in 2017 and slightly strengthen throughout 2018 to a 3.1 percent growth.

Inflation is currently expanding by its fastest pace in several years  largely due to the rising oil prices. This will push the increase in consumers’ prices to 1.6 percent in 2017, up from 0.2 percent in 2016, while the inflation rate will decelerate slightly to 1.5 percent in 2018. This scenario suggests that inflation will, for first time in years, lie closer to the ECB target of price stability; close to, but below 2.0 percent. Core inflation (which excludes volatile items like commodities, energy and non-processed food) is however increasing at a somewhat lower rate of just 1.1 percent in 2017 and 1.3 percent in 2018.

Growth stabilization in most emerging countries and solid growth in the advanced economies will help to reach a gradual recovery of the global economy which should enhance European exports. We thus forecast exports to grow by 3.7 percent this year and next.

Oil prices fell by some 75 percent during 2014 and 2015, before recovering sharply in 2016. On back of the expectation that the OPEC countries will stick to their current production quotas our consensus forecast for the oil price (Brent) in 2017 is around USD 55 and USD 59 in 2018.

The ECB is expected to begin a gradual reduction of the expansionary monetary policy during the forecast horizon. This is expected to lead to a slight appreciation of the euro against the dollar from the end of 2017.  The Chief Economists’ Group’s consensus forecast for the euro/dollar exchange rate in 2018 is 1.11 with a relative wide margin between 1.05 and 1.20.

RISK TO THE SCENARIO

The CEG’s consensus remains surrounded by a number of both upside and downside risks.

The risks to the growth outlook are fairly balanced, according to the Chief Economists’ Group

📌This year marks the 10th anniversary of the @CyberSecMonth!

Throughout October, we will promote our tips on how to stay safe online!🔐

The European Cybersecurity Month kicks off today on the heels of our latest proposal on cybersecurity: The Cyber Resilience Act.

It is our answer to the modern security threats that are now omnipresent through our digital society.

EBF Board Communiqué May 2017
Scroll to top