“Fintechs should see cyber security as a priority”

“Fintechs should see cyber security as a priority” 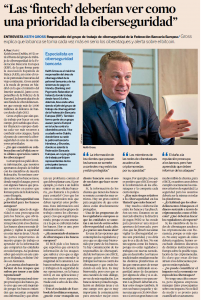 Keith Gross, Chair of the Cyber Security Working Group of the EBF, speaks to the Spanish financial daily Expansión about cyber security in  the financial sector. The interview was published in Spanish. Click here for the online original version. A translation in English is available here.

On Monday, European and Spanish police authorities announced that the leader of the crime gang behind the Carbanak and Cobalt malware attacks targeting over 100 financial institutions worldwide has been arrested in Alicante, Spain, after a complex investigation conducted by the Spanish National Police, with the support of Europol, the EBF, the US FBI, the Romanian, Belarussian and Taiwanese authorities and private cyber security companies. EBF press release

Review of EU system for financial supervision – EBF position on the ESAs...
Scroll to top