On 26 September the pre-conference of the European FinTech Awards took place in the European Parliament, hosted by MEP and FinTech rapporteur Cora van Nieuwenhuizen. Addressing the room full of FinTech entrepreneurs, Mrs. van Nieuwenhuizen shared her motivation to take the individual initiative to report on financial technology and reminded everyone that the financial industry is better off looking to the future instead of the past.

EBF CEO Wim Mijs, also a judge deciding on the Top 100 European FinTech firms, outlined the current state of FinTech in Europe and the role that banks are currently fulfilling. It became clear that Europe on itself has a unique ecosystem with lots of talent and potential. Nevertheless, the need for smart regulation remains a prominent topic on the agenda for financial technology providers.

Interview: “FinTech is a true blessing for our industry”

EBF CEO Wim Mijs was asked to give his perspective on the thriving use of financial technology in Europe. 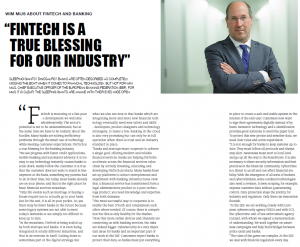 Click here for the full interview with Wim Mijs in ‘Disruptive Finance Magazine’ published at the occassion of the European Fintech Awards.

“Banks got a kick at the right moment and are moving in the right direction” @Wim_Mijs at the #FinTechEU Awards pre-conference pic.twitter.com/Vso4ya8MMS

EBF at the European FinTech Awards 2017 pre-conference in the @Europarl_EN: telling the story of #FinTechEU to a room full of innovators! pic.twitter.com/GeFDCLDEHN

“The dinosaur standing in the way of #finserv & the customer is a complex regulatory environment” @Wim_Mijs at #FintechEU Awards pre-conf. pic.twitter.com/EIEHSvmfgK

EBF Report: Towards a Green Finance framework
Scroll to top